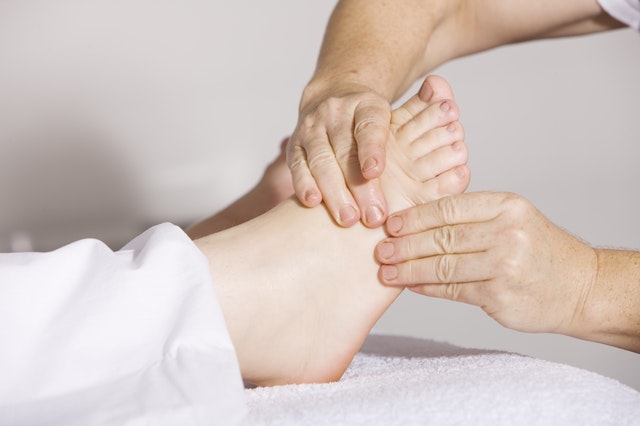 Anyone who’s had their feet worked on by a trained professional understands why a field of study exists that focuses on the little appreciated, yet highly used (and abused) feet.

There’s a very good physiological reason for that – nerve stimulation in the feet can help alleviate pain in other areas of the body. Plus it just feels great, often resulting in a whole-body sense of calm and relaxation.

believed that stimulation of one part of the body would elicit a positive response from another part.

Reflexology techniques and knowledge have been passed down for hundreds of years – particularly from Acupuncture practices first developed in China between the 14th to 16th centuries. Reflexology is based on the same core principle.

Sure, it feels great – but what’s actually going on when you receive Reflexology?

Where general massage therapy is therapeutic pressure to a large area, reflexology focuses attention on bundles of nerve endings and is a modern presentation of ancient knowledge.

While a similar nerve stimulation can also be done by acupuncture, reflexology is limited to the hands, feet and ears.

The early students of such nerve stimulation learned on bronze statues. Today massage therapists learn by referencing detailed anatomical charts and practicing on themselves and other students of the craft.

Dr. Jesus Manzanares was one of the early medical researchers of reflexology and believes the body mapping within the nerves of the foot allow stimulation of those nerves to also stimulate corresponding organs in the body.

By learning the internal arrangement of nerves in the hands, feet and ears, therapists apply pressure to specific nerve endings under the skin in order to stimulate nerves in other parts of the body, leading to positive outcomes for issues as diverse as headaches and digestion.

OK, so how does it specifically help?

Reflexology works by stimulating the various reflex areas of the feet, and that can have an indirect effect on internal organs through its impact on the central nervous system.

Before understanding this process, it’s important to understand what a reflex actually is – an involuntary response to a stimulus that only happens because of the stimulus.

Pressure to the bundles of nerves in the foot cause a reflex that sends an electrochemical nerve impulse to the Central Nervous System, and then through an intricate but instantaneous process, the CNS returns a response.

The natural effect of this stimulation is a release of endorphins – a natural pain-killer.

As the nerves are stimulated, the brain is encouraged to produce more and more endorphins. The constant pressure starts to confuse the body, and ultimately the sensation overload forces the body to close off its “pain” sensation, usually providing great relief.

In fact, a UK study in 2013 found that reflexology was very successful in helping patients deal with pain. The researchers at the University of Portsmouth found that people felt about 40 percent less pain and were able to stand pain for about 45 percent longer when they used reflexology as a method of pain relief.

Patients will still be able to feel the unusual pains that alert us to danger, such as the burning sensation of hot metal on the skin or the sharp pain of a broken bone.

Like acupuncture, researchers believe that reflexology stimulates the nerves in a way that “caus[es] the brain to release chemicals that lessen pain signals,” without eliminating the ability to feel.

This sort of bodily manipulation could be helpful for patients who are trying to recover from injury, manage chronic pain or wean off of opioids.

Reflexology may support other wellness treatments, helping to provide relief for patients who suffer from larger health issues like migraines, asthma, back aches, PMS, heart disease and cancer.

Give reflexology a try!

For those nervous about trying acupuncture, reflexology presents a wonderful starting point!

You’ll be treated fully clothed and either sitting or lying in a comfortable and supported position.

Pay attention to the signals from your body and provide feedback to your reflexologist as pressure is applied.  If things get painful or too intense, make sure you say something as your provider’s intention is to help you feel better and letting them know about sensitive areas will make it easier for them to understand the unique details of your body.

More than likely though, you’ll fully enjoy the experience and the relaxed, blissful feeling that comes after a session focused on your feet.